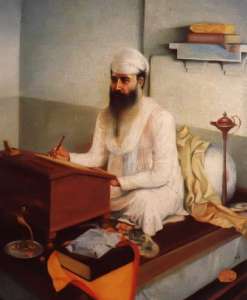 Bhai Gurdas was born in 1551 in Goindwal a small village in the Punjab. He is well known as “Ved Viyas’ of Sikhism in the Sikh history. He was a great schlor, historian and preacher. He was original scribe of the Guru Granth Sahib and a companion of the four Sikh Gurus. He completed the “Adi Garanth” in 1604 as dictated by Guru Arjan Dev ji. It took him nearly 19 yrear to complete this task. His other works in Punjabi are collectively called “Varan Bhai Gurdas”. The Akal Takhat was revealed by Guru Hargobind Sahib on June 1606. When Guru Hargobind ji remained in Gwalior Fort Prison. He asked Baba Budha to perform the service of Darbar Sahib (Harmandar Sahib) and Bhai Gurdas to care of Akal Takhat. It was the appointment of Bhai Gurdas as the first Jathedar of Akal Takhat. He was died on 25th Augu-st 1636 at Goindwal

Bhai Kanhaiya was born in a Dhamman Khatri family of Sodhara near Wazirabad in Sialkot District 110 (1648CE). During his youth he spent a lot of time in the company of Nanua Bairagi. Who was also a disciple and comrade of last three Sikh Gurus. But his quest ended as he met Guru Teg Bahadur. Bhai Kanhaiya was often seen carrying a ‘Mashal (to serve water to anyone who was thirsty. He took upon the task of quenching the thirst of the wounded soldiers in the battle of Ananpur Sahib in 1704. He did sewa with affection without discrimination between the Gurds Sikh soldiers and the Mughals armies’ soldiers. His act of compassion stress up stern criticism amongst his fellow Sikhs. They complained that Bhai Kanhaiya was using water to wounded soldiers for the enemy camp.! Guru Gobind Singh ji summoned Bhai Kanahaiya. But with the answer of Bhai Kanahaiya, Guru ji was pleased that he had understood the deep message of Gurbani correctly .Guru also gave Bhai Kanhaiya ji medical balm and said from now on you should also put this balm on the wounds of all who need it ‘.’Bhai Kanhaiya died in 1718 CE after retiring to sadhara .His example as a forerunner of the present day Red Cross ,is a tribute to the universal message of compassion and kindness to all . Sikhism produced Bhai Kanahaiya, more than hundred years before the inception of the Red Cross. 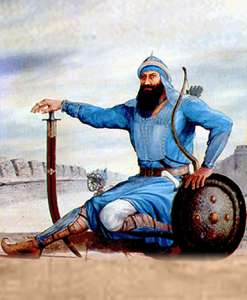 Banda Singh Bahadur was born on 16 Oct 1670 at Rajouri in Jammu and Kashmir. His earlier name was Lachman Dev. As a young man he shot dead a doe and was shocked to watch the mother and her aborted fawn writhing in pain and dying. After this gloomy scene he had a change of heart. He left his home and became a disciple of a Bairagi Sadhu Janaki-Das, who gave him the name Madho Das. In the company of Sadhus..he travelled through Northern India and finally arrived a Nanded ( in present day — Hazoor Sahib M.P.). Here he become a disciple of Guru Gobind Singh ..Armed with the blessing and authority fo Guru Gobind Singh he assembled a fighting force and led the struggle against the Mughal Empire. After long struggle the Sikhs captured Sirhind in 1710 and killed the Governor of Sirhind , named Wazir Khan who was responsible for the martyrdom of the two youngest sons of Guru Gobind Singh at Sirhind Becoming the ruler of Sirhind Banda Singh Bahadur gave order to give the ownership of the land ..At Lohgarh he issued his own mint . The coin described Lohgarh ,”Struck in the city of the peace ,illustrating the beauty of civic life and the ornament of the blessed throne” . When the army under the rule of Samad Khan the Mughal King of Delhi laid siege to the Sikh forces. The Sikh fought and defended the small fort for eight months In December 1715 Banda Singh Bahadur and his starving soldiers were captured from the Gurdas Nangal fort. After three months of confinement on June 1716 Banda Singh’s Eyes were gouged his limbs were severed his skim removed and then he was killed. 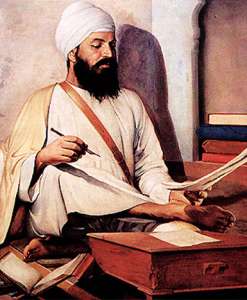 Great poet and historian Bhai Santokh Singh was born at village Sarai Noor Din Distt Taran Taran in September 1787. At the age of the eleven Santokh Singh gained immense knowledge of the Sikh scriptures, history and spirituality. His diligence in studying prompted him to go to Benaras in 1808. After gaining considerable knowledge in various subjects he returned to Punjab in 1813 Bhai Santokh Singh was appointed the Raj Kavi of Boudia Riyasat where he was greatly honoured, but his main aim in the life was to write the Gurus History. The Greatest work of Kavi ji is the “Suraj Parkash” or “Gur Partap Suraj Granth” which is a complete history of the ten Gurus. Undoubtedly this tremendous task finished with grace of God in 1843. He took his life work of Suraj Parkash and Nanak Parkash to Akal Takhat and had an Ardassia to do an Ardas, thanking the Guru for the divine assistance given to him for completion of these Garnths. That very year he died after presenting his extraordinary acomplihsement to Darbar Sahib and the entire Sikh panorama. Bhai Santokh Singh ji died at Kaithal (Haryana) on 19th Oct .1843.